Coding on the road (read: traveling) has historically been a difficult endeavor. Twenty years ago it would have been nearly impossible and even 10 years ago it was difficult at best. The lack of connectivity was a major hurdle, and the (large) size of laptops and short battery life made it an extremely inefficient choice.

Technology has thankfully caught-up and many coders now hold down a full-time career while traveling the world. There's even a nomadic code school.

Now, I'm far from being nomadic but I am making strides toward it - reducing my physical possessions, working remotely and investing in the right tools. I plan to share more about each aspect over the coming months, starting now with my go-to tools.

We're a power-hungry demographic and without juice we're fish out of water.

Anker Powerport 4
By far the best travel charger I've used. I started with the Powerport 2 and recently upgraded to the 4. At nearly the same size as the 2, the additional ports allow me to charge multiple devices at once, and even fellow travelers'. With 40W of output it can safely charge several devices at the same time. The foldable plugs keep the form factor small and Anker's Smart IQ technology optimizes charge times.

Just a heads up, I'm a bit of an Anker fanboy so there are a few more to come…

OREI Adapters
If you're traveling abroad it's worth a few bucks to buy a quality plug adapter. If you're not convinced scan the reviews on some poorly rated adapters and you'll quickly change your mind. That, or temporarily lose feeling in a few fingers. The OREI adapters are highly rated on Amazon, feature 2 outlets and have a small form-factor.

Also, if you're a fan of design you definitely need to learn about UK plugs.

Apple World Travel Kit
Related to the previous item, if you're using a Macbook or other Mac chargers, Apple makes a set of adapters to replace the standard 2-prong U.S. plug. You simply snap off the U.S. plug and snap on the plug used wherever you're traveling. 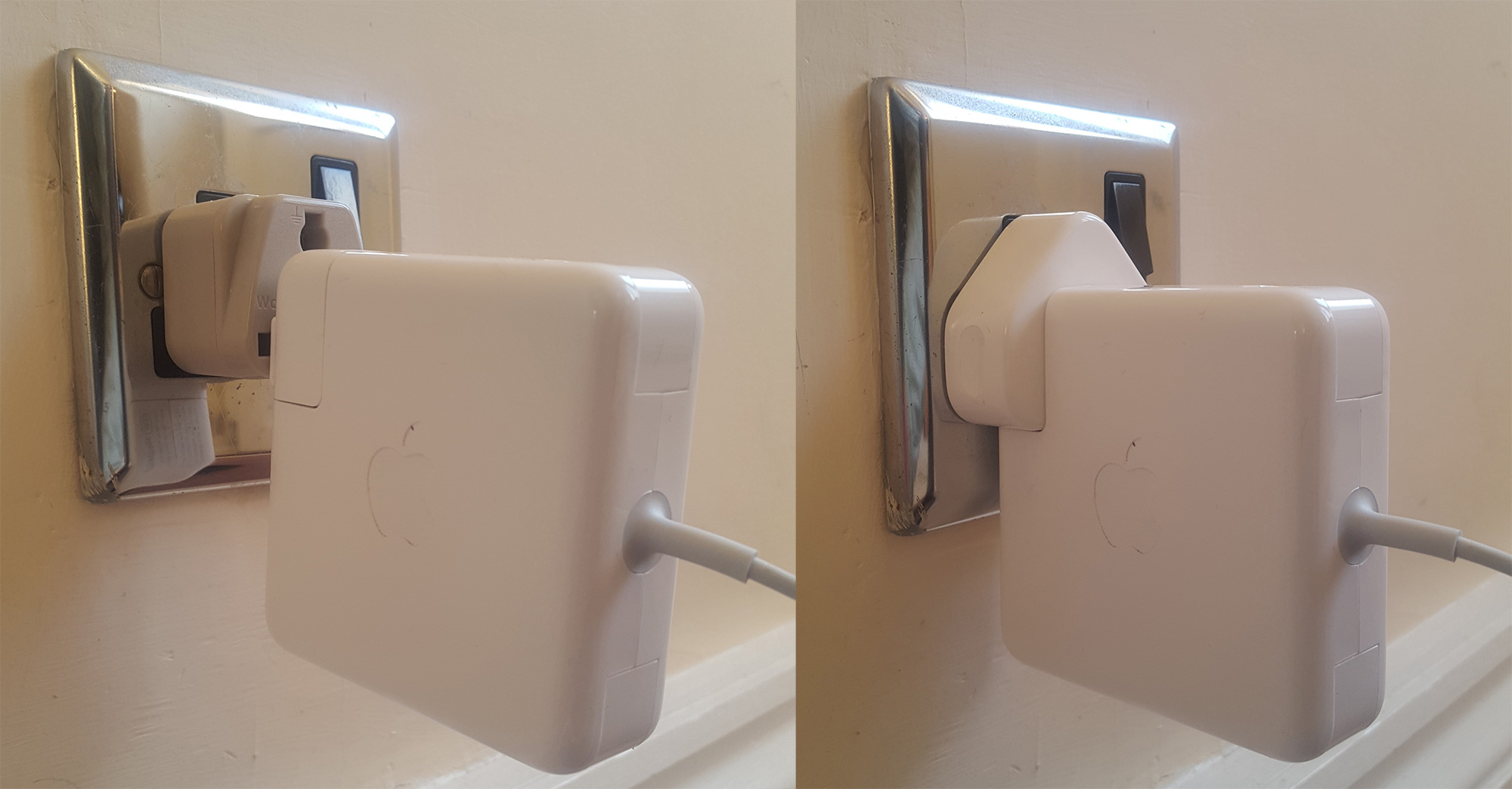 Why's this necessary when you already have an adapter? In my experience the Macbook's power brick is more dense than gold and it'll routinely pull itself out when plugged into an adapter. This is annoying and it's worth carrying this extra solid adapter.

Anker Astro E7 Battery
When there's no outlet in site (or on long flights) a portable power source is a must. Anker makes a variety of batteries and the Astro E7 is large enough (at 27,000mAh) to charge most phones nearly 10 times. With 3 USB ports it can charge multiple devices at a time and has an indicator light to let you know when it's getting low.

Anker USB Cables
You don't question the quality of a USB cable until the moment it fails you. The cables from Anker are some of the most overthought USB cables you'll find. Reinforced with Kevlar, tested to 10,000 bends and built for fast-charging these are the best cables I've used.

For extra validation of their quality read a 5-star review from the king of USB cable reviews.

While we all dream of fast, free wifi everywhere we go it's far from a reality. Even 'free' wifi usually comes at a cost - filling out a form, watching some ads or putting up with insanely slow speeds.

If you need a consistent wifi signal wherever you go (especially when traveling abroad) here are two services I've come to rely on.

Boingo
Boingo is a month-to-month wifi service available in many airports and abroad. Their networks are widely available in Europe (especially England). The Mobile plan is relatively inexpensive ($10/mo) and can be purchased on a month-to-month basis with no contract. The connection speeds are faster than most 'free' wifi networks and I can usually get a connection in seconds instead of minutes.

Verizon Jetpack MiFi
Boingo is great but the Mobile plan is limited to phones and tablets (though they offer plans for laptops too). When I need to get real work done I've found a wifi-hotspot device is the best option.

If you're not familiar with hotspot devices, they generate a wifi network from cell tower signals. If you're in the U.S this means you'll get a wifi signal anywhere you have 3/4G reception. There are several services available - Verizon, Karma and Freedom Pop to name just a few. I went with Verizon for several reasons:

The device is easy to use and creates a small wifi network capable of serving up to 12 devices.

In the past I've always purchased inexpensive headphones. While there are decent inexpensive options you usually get what you pay for and after burning through a few pairs in as many years I decided to splurge.

After testing several pairs I went with the Sennheiser Momentum 2 Wireless On-Ear headphones. The noise-cancellation is great, sound quality amazing, they feel like they can take a beating and with a built-in mic I can even take calls. The Bluetooth connectivity has been consistent through tens of hours of use and they have an audio jack to plug into a plane's entertainment system.

A second display is a must if you're coding. It seems ridiculous but it's hard to work efficiently on a single monitor, especially a single laptop monitor.

Thankfully I'm not the only one who feels this way and a handful of portable monitors are now on the market. Everyone from Lenovo to HP, Asus and others are producing them, and for relatively cheap. An alternative option, many tablets can be used as 2nd displays. If you're already carrying around an iPad Pro it might be worth looking into.

Nearly all the standalone displays are LED-based and powered through a USB 3.0 cable, the same cable providing the video signal from your computer. Thicknesses are usually around 1/3" to 1" and some include speakers and other input options like HDMI.

The display is ridiculously light, has a great picture and doubles the viewport size of my 15" Macbook Pro.

Carrying a laptop can be a total hassle when going through airport security. Not to mention the shoes, toiletries, jackets and so on. And don't even get me started on the lines and people's bin management.

If you think about a price you'd be willing to pay to:

If so, there's a solution - Global Entry

For the price of $100 for 5 years ($20/yr) you can zip right past all that hassle if you apply (and are accepted into) the Global Entry program. There are similar programs, like TSA Pre, but Global Entry works for both domestic and U.S. Customs.

In reviewing my list I realized it sounds like a large load of gear to carry around. However, with the exception of the headphones and second monitor every piece of gear fits into a small zippered pouch about the size of a large beer can, or about 0.5 liters. Small enough to carry in my messenger bag daily.

Even the second display isn't too much of a burden. At 8mm in thickness it's similar to carrying a large tablet. It's protective sleeve adds some bulk but it's still barely noticeable in my pack.