Five weeks ago my wife Sylvie and I sold all our furniture (and some clothes, appliances, and other stuff) put the majority of our remaining belongings into storage and moved out of our flat in southeast London. On each of our backs (and fronts) were a duffle and carry-on.

Our only confirmed reservation was an Airbnb in eastern France for 5 weeks but our tentative plans called for being on the road much, much longer. As a result, our bags contained a mix of clothes for a trip to unknown destinations with an unknown timeline.

The carry-ons contained the more important gear - 2 MacBooks, 2 iPads, 2 mobiles and a kit of chargers, cables, wifi router, hotspot device, and other gadgets. One of the only knowns about our journey was it would be less about traveling and more about living (and working and studying) in a new destination every few weeks/months. Aka, slow travel.

Our History of Travel

Travel has been central to Sylvie and I's relationship since day 1 when we met at a wedding between mutual friends in Sonoma, CA. I had traveled from Bozeman, Montana, and Sylvie from London, England. After meeting at the reception we decided to reconnect in San Francisco a few days later and spent several days exploring SF together. Then returned to our homes ~4,500 miles apart.

Over the next year we rendezvoused in locations around the world - England, Belgium, Washington State, Scotland, Spain, Montana, Wyoming, Ohio, and Costa Rica. And finally, just short of a year from the day we met, we got engaged.

We debated a wedding but with family & friends spread around the world and a desire to set the visa process in motion sooner-than-later, we eloped. Sylvie flew to the US and we tied the knot in the shadows of the Grand Tetons. 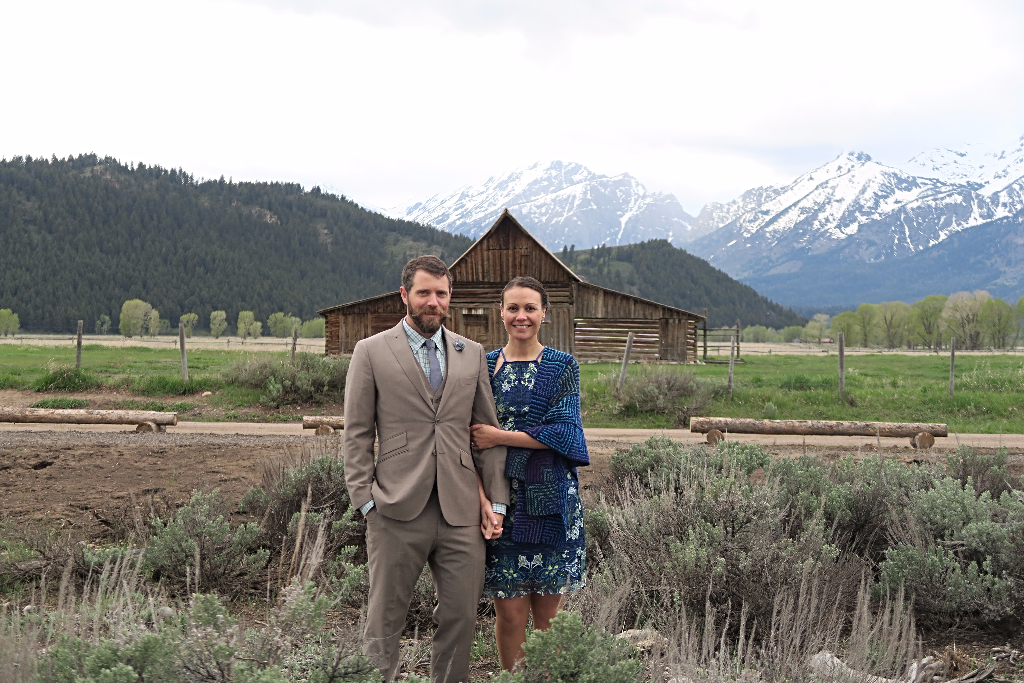 With Sylvie working as a senior flight attendant in the U.K. and me working as a software engineer in the U.S, we decided the best option was for me to make the move across the pond. We applied for a spousal visa in August of 2016 and the visa was approved in October.

Our first few months of married life were spent primarily in southeast London with weekend trips to Wales, Germany, Scotland, Portugal, Netherlands, and around England. But there was always a desire to travel even more. We're both drawn to new places, new experiences, and feel at home on the move.

Travel was also the medium we initially learned about each other - seeing how we handle new and unknown situations, stressful experiences, budgeting, and other facets of our personalities not revealed during usual daily life. And both of us wanted to continue that exploration.

And so, in July of 2017 Sylvie quit her job and enrolled in online school, we sold all our furniture (and some clothes, appliances, and other stuff) put the majority of our remaining belongings into storage and moved out of our flat in southeast London. On each of our backs (and fronts)... you get the point.

Which Brings Us to Now

For the past 5 weeks we've been living in the charming city of Besançon along the eastern edge of France. It's amazing how fast the time has flown by, it truly feels like we were packing our storage unit just yesterday.

A common question we get is 'how can we stay on the road for so long?' For starters, we found a great place via Airbnb, and with utilities and internet included our monthly 'rent' is significantly less than we were paying in southeast London. Granted, the area we lived (Surrey) was recently ranked the most expensive place to buy a pint of beer, so moving almost anywhere would have been less expensive. But is being cheap how we make it work?

Our Keys to Slow Travel

Budget is obviously one of the main factors when traveling. But when slow traveling, budget isn't all that different from your normal lifestyle budget. After all, we're not traveling so much as living in a different place on a shorter-than-usual basis - several weeks/months in one place. Our budget contains the normal line items - rent, food/groceries, entertainment, etc. So while budget is important, it's not what I consider a key to slow travel.

Succeeding at these priorities helped us go from drafting our slow travel plan to being on the road in less than a month, but we had to work to achieve them. For example, we now own very little stuff, but this hasn't always been the case.

Before I moved to the U.K. I owned a stable of 7 bicycles, Toyota pick-up truck, rented office, furniture, appliances, outdoor gear, tools, and drawers full of unnecessary stuff. At one point I even had a storage unit where I stuffed the stuff I couldn't stuff in my house.

The impending move to the U.K was a great incentive to de-stuff and once started it was a slippery slope. By the time I departed for the UK the entirety of my stuff including packaging fit into a 4x6x10-ft box. A de-stuff-ing of 80% I estimate.

Side note: George Carlin sums up my thoughts on stuff.

Sylvie has generally lived on the lighter side, mostly a result of moving between the U.K, Czech Republic, Australia and back to the U.K over the past 15 years. But over those years she also accrued stuff.

So before embarking on our journey we de-stuff-ed again - selling and/or donating a couch, chair, bed, and rarely-worn clothes. In the end, our collective stuff was down to a manageable load small enough to transport in a small van, in a single trip, and fit into a 50 sq ft storage unit.

The most surprising outcome of all this de-stuff-ing is how little we miss the stuff. And honestly, 'little' is an overstatement.

Without a stuff-anchor we're now able to move about more easily and care-free. Which brings us to the next key factor - location-independence.

In my opinion, location-independence is the critical factor. Sure, having less stuff makes slow travel, even general travel, far less stressful. But it'd be possible with a house-full of stuff locked up far away. The real key to slow travel is not being anchored to a physical location.

In other words, we're free to move about for extended periods of time without the need to return to a specific location.

Becoming location-independent is far more difficult than de-stuff-ing, and one of the main reasons is often a career/job. We too were on this boat and had to make some sacrifices.

Namely, Sylvie had to resign from her airline job. After 5 years of flying she returned to school (an online program) to earn a degree in Travel & Tourism Management, with the goal of building a more location-independent career.

For me, remote work has been a long-term dream and I've been building the skills, contacts, and tools to make it a reality for years. For the past 2 years my primary role has been as a Software Engineer (frontend) for Citrusbyte with a side gig as a coding mentor for Thinkful. Both roles are 100% remote.

I'm lucky in that my career is one of the leading location-independent roles. But don't fret if you're in another industry, an increasing number of other careers, job roles, and employers are becoming location-independent. So even if you're in a field not typically associated the 'digital nomad' movement, it may only be a matter of time. Changing careers is also becoming more common, and easier, so don't rule it out.

A few other factors which help us to be location-independent:

None of these are mutually exclusive with being location-independent but do help IMO.

Side note: If you're a frontend or backend developer, UI/UX designer or product manager and interested in remote work - Citrusbyte is an amazing company and on the lookout for experts to join our team.

Between the two of us our current requirements (beyond the usual food, water, and shelter) are relatively minimal - a stable internet connection and quiet workspace. Thankfully, our Airbnb in Besançon and the city itself has been an ideal fit. Fast internet/wifi/cell, with ample ways to get outside for a quick run or bite to eat. For more info on the city see Sylvie's guide to Besançon.

After arriving we quickly settled into an efficient routine. During the weekdays we generally keep our heads down. I work, with occasional meetings and mentoring sessions. And Sylvie focuses on her studies, in addition to handling many of our daily tasks and travel planning - researching weekend trips, where we'll move next and how we'll get there, and translating (she's much better at picking up local languages than me), to name just a few.

Then we make the most of the weekends by exploring the city and surrounding areas.

Our slow travel experiment has gone better than expected and we're excited to say we're continuing the adventure. The remainder of 2017 is already booked, with tentative plans for early 2018.

This is our final week in France so we'll be moving to our next location this weekend. If you're interested in our slow travel journey, join us: